We want to give credit to the women at our firm that faced staggering odds to be where they are today. While statistics don’t lie, they also do very little to tell a story. In our 3-part series, we want to give you the personal perspectives of our female engineers to see just how difficult their journey was (and the successes they had along the way) and showcase their tenacity and grit.

If You’re a Woman Engineer, You’ve Beaten the Odds

Let’s cut to the chase and take a look at some sobering statistics concerning women and the engineering industry. As of 2014, only 7.9% of the first-year STEM students studying in American universities were female.

Of that group, over 32% decided to switch their major at some point. However, things are looking better at the university level as more and more programs are being created that introduce STEM to young women before college. Because of these efforts, the percentage of doctoral engineering degrees awarded to women has increased from 11.6% in 1995 to 22.2% in 2012. [source]

One statistic speaks to the persistence of female engineers: overwhelmingly, many more female engineers pursue a graduate degree compared to their male undergrads. [source]

We’re pleased that Susannah Campbell, Environmental Manager, and Kim Morris, Civil Designer beat the odds and made a successful career out of engineering. We asked them to tell some of their stories.

“I’m under no illusion that this field is anything but male dominated. Coming to terms with that simple fact is, perhaps, the first step toward carving out success as a woman in engineering. I don’t think I’m wrong when I say chances are a man can enter a room and assume he’ll receive respect from his colleagues. A woman has to work to earn it. While I don’t think that’s right, I think it’s made me a thick-skinned, hardworking person. 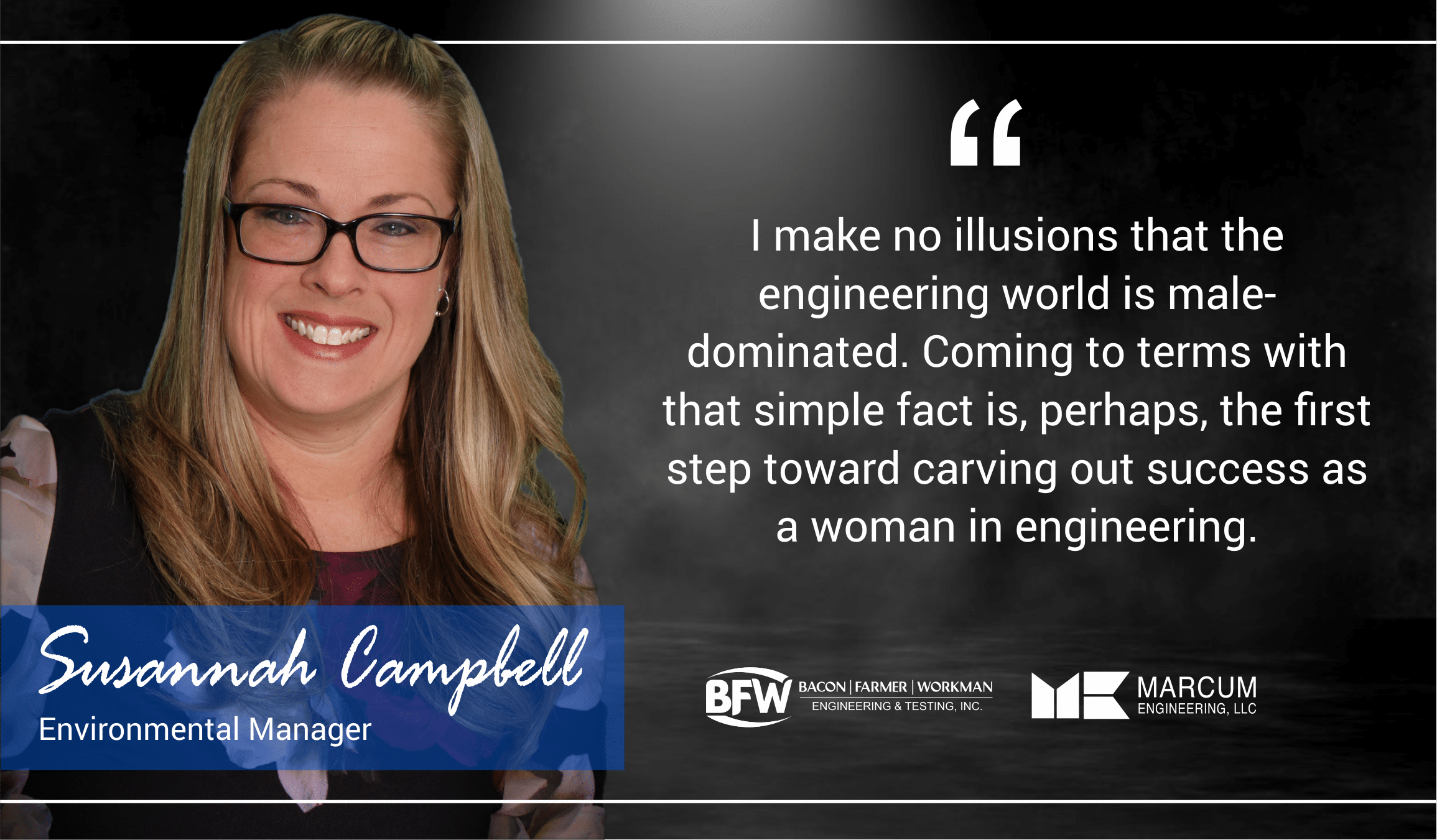 When I was in engineering school, I was the only female in my graduating class for mechanical engineers. Do you know how hard it is to earn a degree in engineering? Now think about the increased challenge when none of your peers are your gender. You can relate to the guys in some way but, at the end of the day, you still feel like you’re all alone in your pursuit. Now that STEM has gained a foothold in high schools across the country, I’m happy to see more and more women pursuing my degree. I will tell anyone; engineering is not inherently male or female, it’s simply comprised of people that receive the most support and the most opportunities. Finally, we’re seeing that imbalance shift a little.

One of my fondest success stories is wrapped in frustration, as they often are. There was an instance where a client from another firm didn’t feel the need to work with me directly even though I was the point person on their project. Instead, they’d send their communications to my male coworker, who had very little to do with that project.  Once I spotted that pattern, I tactfully steered the client back to me. I proved to them that I was the direct contact who they wanted to talk to and we finished the project successfully. Afterward, they apologized to me for assuming my coworker was project lead.

I mirror Susannah in a lot of ways. I’ve found that respect is often not given freely and is often hard-won from university to the job itself. However, if you were to look at finished engineering work you’d have no ability to assign a gender to whoever designed it. Women are as important as men in engineering; it’s that simple.

My greatest success comes from being hired straight out of college. That’s an accomplishment in and of itself. However, I went to school for mechanical design and was hired for a civil/transportation drafting job. The two schools of engineering are adjacent but unique, so I was flattered that my overall engineering abilities were strong enough to jump proficiencies like that.

Most of all, I was encouraged and believed in by my project manager. I feel like he was the one that set me on my path of pushing forwarding and believing in myself to accomplish every task put before me. And still today with BFW/Macum, I feel that same level of support from leadership.